In my last post, I went to Target desperately looking for cards to make my day better. In this post about my next visit to Target, I had no desire to get cards- okay, as a collector the desire never leaves me but I wasn’t prepared to buy cards. Naturally, they had out some solid clearance boxes that I wish they had last time after my CT scan. Thankfully I had gift cards on me – I am really good about waiting to use my gift cards until I see something I really want. Unfortunately I am out of Target gift cards, but hey my birthday is in November.
The  Bowman Platinum and Topps Archives Baseball caught my eye, both from 2014. As a small time collector, I never get anything Platinum or premium, so I jumped at the chance even though I am not a fan of the Bowman product. (Naturally, I am also sitting on an unopened box of Inception that I won and am waiting for the right time to open.)  At $12.99 it was worth the fun. Archives caught my eye because this is the set that features cards from ‘Major League.’

I am going to start with the better box first before I get into angry collector mode on one box.
The Platinum box felt like the box that kept on giving.  Maybe I felt this way because I wasn’t expecting much at all as I know that these boxes are notorious for goose eggs. Every pack had some form of insert. From the beautiful cut cards of George Springer, Gary Sanchez, and Jose Abreu to the parallels featuring A.J. Cole and golds of Bryce Harper and Mike Trout. Okay I know the golds are going for less than a dollar but to a small time collector like me, this was gold. The only time that I ever hit players like Harper, Trout, and even Abreu are commons; not gold parallels. 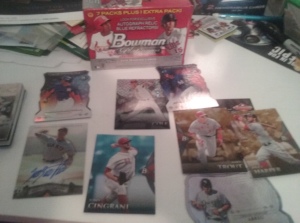 I also managed to pull an autograph- Joan Gregorio. Who? Some random Giant minor leaguer who peaked at 14 on prospect lists and few years ago and has seemingly fallen off the planet since. Cool none the less.
These cards scratch way to easily and despite being ‘Platinum,’ I feel like the company skimped on card stock. These cards will not age well. The card stock of Archives, despite being a lesser set, has better quality card stock. I can store the Archives cards in a box for a while and pull them out and they will still probably be grade worthy. You cannot say that for Platinum.

As for the Archives box, I got a hit but even with the hit I feel like I over payed. 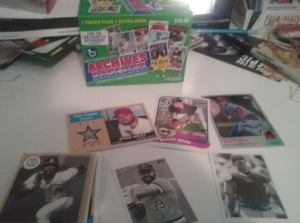 I like the design of the cards, as I am a fan of the old school vibe. It is clear however that the product relies on nostalgia as a price point. I love nostalgia more than next guy but a poor product is a poor product. This is more of a product that you collect to build sets; which is not something that I think should be done with nostalgic players because let’s face it not everyone is a fan of Dave Parker, Ralph Kiner, or Paul O’Neil. For example my insert minis were of Mike Matheny and Dave Parker. Neither player does much for me, and I would be curious if anyone was ever truly a fan of Matheny. I mean the guy had a lifetime batting average of .239 – I had to check that and I was expecting it to be a tad lower. The guy is a great coach, but as a player he skated by on his glove and let’s face it he played a position that lacked ‘Web Gems’ like a different position would offer. I mean what people like him because he caught balls in the dirt well? Off the tangent. The box was full of meh.  I got a hit which was a Wade Miley jersey which is a future dollar bin find. This box would’ve been good at a $9.99 price point but even at the clearance price I payed I felt it was lacking; and this was a loaded box compared to some of the boxes that I have seen. I have seen several of these go hitless. In fact, I remember this product was one of the few that I bought when it came out and I went hitless in that. That was a box that I wouldn’t have minded because I got 2 or 3 Major League cards compared to one here. I did manage to pull a Bruce Sutter parallel numbered to 99; far from the saving grace.