Happy Star Wars Day to the majority of the world. I personally could care less. I am a 30 year old man who has never seen any of the movies. As a teenager, I bragged how I was a non-conformist for not seeing it. Once I matured though, I had no reason for not seeing the movies. I was going to see the movies with a girl that I was dating who was super into the movie but that relationship didn’t last.  Maybe I will wait until another girl makes me see it because as of right now, I am kind of annoyed by Star Wars.
The amount of promotion that they are putting into the movie is insane. At every chain store in my area, there is merchandise being promoted like crazy. Is Disney trying to justify its investment or do they just know that people will buy this stuff? Star Wars has even crept into my school merchandise. 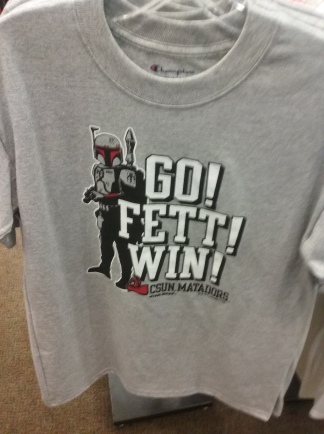 What is the point in having California State University Northridge Star Wars gear?  Students surely don’t need to be reminded that Star Wars exists. In all of my classes, current events are a regular discussion. Furthermore Professors are inevitably going to be Star Wars fans. When I was taking script writing, my Professor said that the first movie is the single best script ever written; this was a man who wrote 2 very successful movies himself. My religious studies Professor this semester took the class’ temperature to see if he could do a Star Wars week; we didn’t.

I am making this sound like I have something against Star Wars. I don’t anymore; it just isn’t my cup of tea. I was never into science fiction. I love sports. I just thought it was too funny and insane that there were Star Wars CSUN shirts.