And now the article that I wanted to write this week. In the short time that they have been around Loot Locker have made a name for themselves. They have been the first annual mail day place in the hobby that has stuck around. Despite thinking about buying one ten times over, I have never pulled the trigger.

I lucked into one in a Twitter contest. I chose basketball because that is the sport that I prefer to buy packs from. Despite a hiccup where I worried about it getting ‘lost in the mail,’ it did come. ALLSWEATY is actually running another contest this month for a Loot Locker.

Despite pulling a ‘board of death’ in one of the three packs, I did pretty well. The Dirk card is numbered to 299 and came from the same Totally Certified pack as the Griffin hit. The autograph is Jordan Adams, made more beautiful and trade-able where I live by the fact that he is in his UCLA attire. My personal favorite, and one that is going on my PC wall, is the Reggie Theus base card with his huge Afro from his playing days. For those unaware, Theus is the coach of CSUN- my now alma mater. 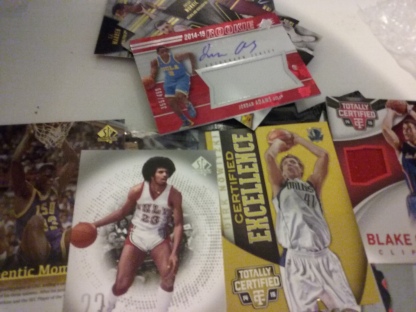