We all have a love hate relationship with repack products that promise hits. I am not going to dwell on that, as I covered that enough in the past. So a month and a half ago, I was in Target with a graduation gift card burning a hole in my pocket. Something new caught my eye, that wasn’t the standard repack or guarantee product that you see at Target. This one promised a hit, a Kevin Durant rookie, had packs, and a floor piece for less than $20 price point similar boxes fall on. At $12.99, I grabbed two to kill my gift card. This is one of the boxes:

The Floor Piece was from the all star game that took place at the Staples Center, so my go to venue being that I live in the LA suburbs. 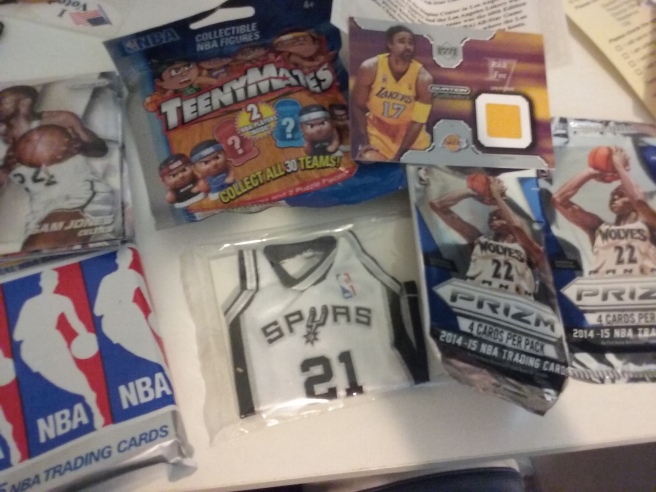 The Kevin Durant rookie card was not in my product. I don’t know if that was an oversight or if it was because I hit a jersey that came one in four boxes, but I am bummed. In my mind the Durant rookie was one of the bigger selling points for me – over the memorabilia card and packs. It was nice to see Prizm packs inserted, where my best hit was a Sam Jones parallel. The Rick Fox hit was decent to me. He is still relevant as he does a ton of acting now, so I occasionally see him on television.

Even without the Durant rookie card, it was worth the $12.99. I would take this over an underwhelming blaster box any day. I will review my other box soon. I have it sitting on my desk for when I have an appetite to open packs.

Update: Someone on Twitter who pulled a mini jersey in this product, got his Durant rookie card so it looks like my box in an anomaly.

Per a request, here is a picture of the floor piece with a card used for size reference.