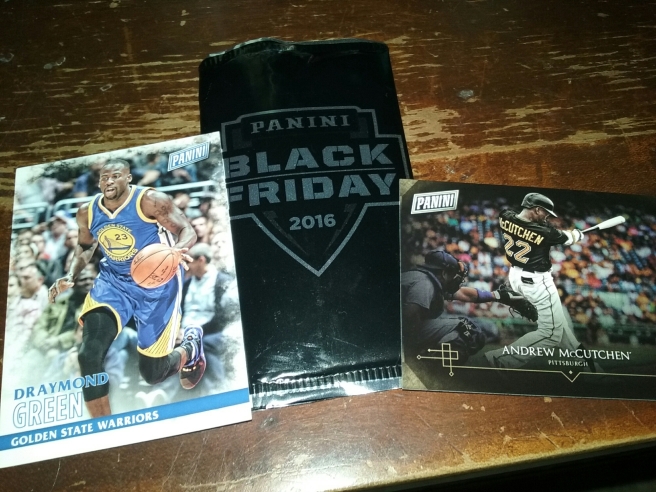 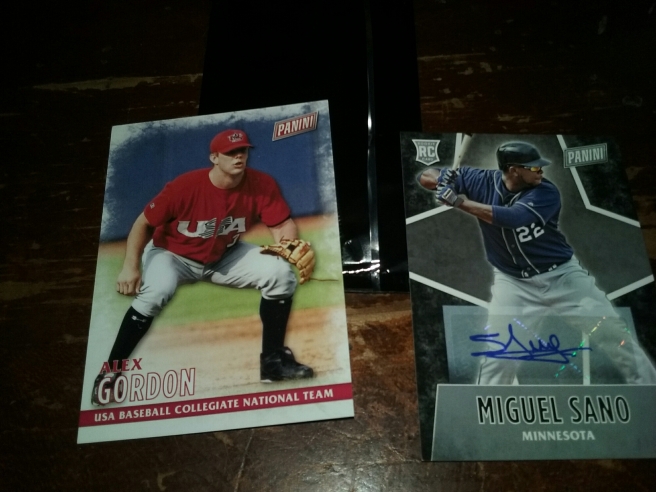 I was given the option of taking football packs or multi sport packs. The last thing that I wanted was another event used football card so I grabbed the multi sport. The packs don’t say the odds but I know that while it might seem like everyone pulled a relic from their packs, that is far from the case. I am not sure about the design of the base cards, then again Topps 16 baseball showed us how to do a winter design. Overall though, I can’t complain.
I want to give a shout out to the people who are not hoarding their Black Friday and Cyber Monday packs. Those that are, and it appears that there is a lot of them, need to grow up and realize that they are killing the hobby.

We are doing a giveaway that ends tonight on Twitter. Wolverine Studios has graciously offered to give away a copy of their game to a collector. All you have to do is follow me and Wolverine Studios on Twitter, and RT the giveaway post below. It’s that simple. Good luck.

Here is the giveaway I promised. Follow .@wolverinestudio and image rules to enter. Good luck. pic.twitter.com/qye9osWOBc

This is a review for a game. I do not like video games. I strive to be productive, so when a game breaks past my wall, it must be pretty good. Draft Day Sports Pro Basketball by Wolverine Studios is one of my all time favorite games that I have ever played. I am sharing this with you because it is a game that I know a lot of you have the potential to enjoy. I can’t tell you how many nights I lay down with the laptop to relax and fall asleep playing this game because it mellows me out after a hard day.

So what is it? A simple game where you play General Manager and/or coach of a a basketball team. Simple is the key word of this game. It is simple, straightforward and clean.

An awesome feature is that you can go back and play historically. I personally like the option of expansion. I am currently trying to create a dynasty with my expansion Grizzlies team. You can also redo the 1984 and send Michael Jordan to your team. Feel that is too easy, then how about randomizing the potential of players when you play historically so Michael Jordan has the chance to play like A.C. Green; never thought that I would ever juxtapose those two together.

Draft Day Sports Pro Basketball is the perfect option for those that want to play a basketball game without all the jazzy graphics. It doesn’t take a ton of computer space and runs pretty smoothly. The best part is, if you have a technical issue with the game after you buy it, support is readily available. The game is small enough that you will get that kind of hands on care. Heck, they even want to know if you have a technical issue so they can fix it for the next update. I love that type of care; and did I mention that the guy in charge of doing that is a card collector.

Obviously I love the game. I have played many versions of it and I feel that it has turned me into a better fan. I love it so much that I want one of you to enjoy it. After this post is published, look for a Twitter contest that will end Monday night, November 28th. I personally suggest buying the game right now, as it is on a Black Friday sale price at http://www.wolverinestudios.com/

Quick post for a lot of loot that put a smile to my face when I needed it. $6 for 5 vintage cards ranging from 1960 to 1970, Palmeiro stamp card, graded Sosa rookie, and a graded Mantle. It felt like value to me but upon inspection of sales on COMC, I got what I paid. As for some site housekeeping, look for a different kind of contest starting tomorrow on Twitter. 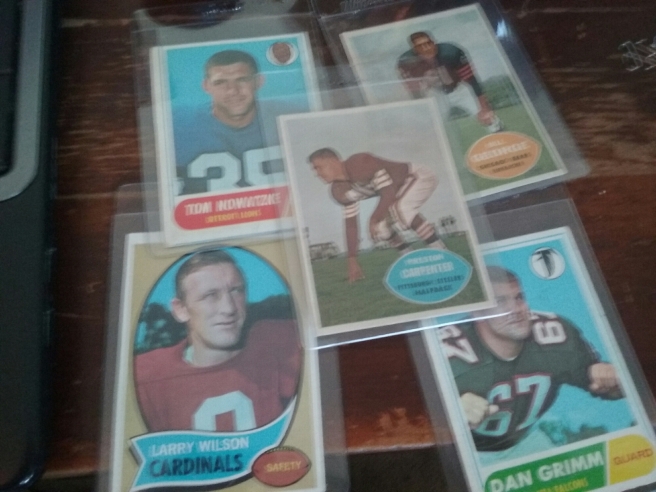 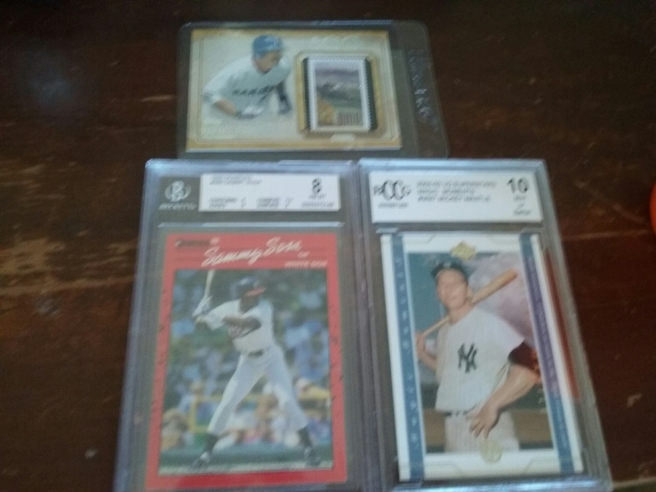 From the Northridge Sports Collectibles bid board.

Those of you that follow me on social media and read this site know that I don’t say ‘angry’ things lightly. As a lot of you know, I am a deeply religious person and a positive side effect of that is that I don’t say harsh things about anyone lightly.
I have spent way too much energy on this company, and have sources backing me up on my accusations. For a company that I dealt with on Twitter, I have also found myself on the phone with them, so this extends beyond an online he said, she said.
Lies from this company, however small they may have been added up to the point that I feel that I have to do this. However, you can also add some late night name calling on their part to this.
Straight up my intentions for doing this post are to protect the hobby. I am forever thankful for how collectors made me feel on my birthday. This is a community that I want to protect.

TLDR: Runs fake contests to promote Ebay sales. Messes with someone who they wanted to promote their company.

END_OF_DOCUMENT_TOKEN_TO_BE_REPLACED

Readers of this site know that I am a huge fan of LoneStarBoxBreaks.com. At one point it was one of the top eight sites that I visited according to my Google Chrome browser. Anyway, Mark is doing something special again. He is doing ‘Thanksgiving Packs.’

From the horses mouth: “Thanksgiving Packs are here. Pick A Pack with a Thanksgiving twist. We have picked hobby boxes from various years for all to enjoy. Selected packs will have a thanksgiving themed sticker on them. If you find one of those, you unlock either a hobby box, site credit and or pack war wins. All boxes/packs are fresh hobby and all hits are within the selected thanksgiving packs.”

I know that I am going to try and snag one. It looks like each pack is $5.50 with shipping included. Totally worth it. 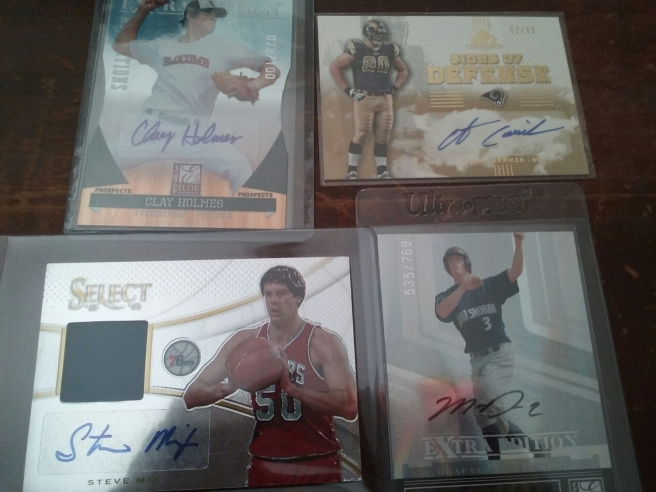 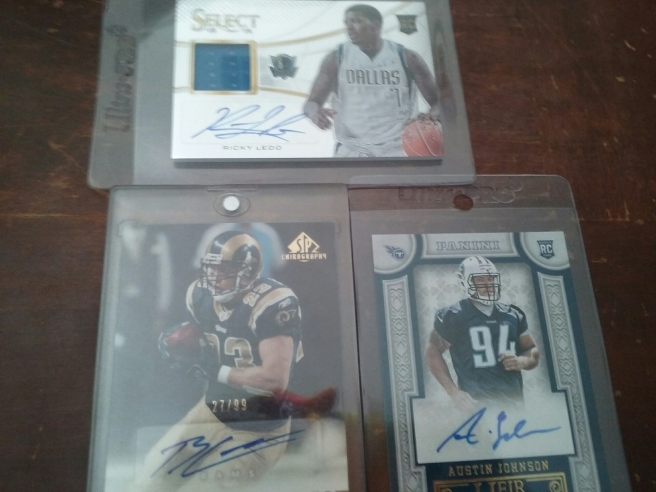 I put dollar bids on any card in a one touch. The card that I was surprised to get the most, is probably the least valuable card of the bunch: the Matt Dominguez autograph. I got this haul from Northridge Sports Collectibles, and this card shows Dominguez in his high school jersey. Chatsworth high is located right off the freeway exit before the card shop – another cool fact is that Chatsworth is El Camino Real, my alma-mater’s biggest baseball rival.

Over the past five weeks, I’ve been gradually buying out a local Wal-Mart’s stock of TNA’s 2010 release. They had the boxes on sale for five bucks. I was watching TNA every week when this came out, and am still an avid wrestling fan.
How was I able to buy them over a few weeks: the kicker was that they weren’t labeled as such. I have been super good with money the past few months, and splurged thanks to this time period. I was thinking that I would at least hit something decent with the amount of boxes that I bought. There were many wrestlers inserted and I was bound to hit at least one that would redeem my spending. Perhaps a Sting, Hogan, Flair. Okay if that is dreaming big, how about a Styles, Angle, Foley, Dudley Boys, or Samoa Joe? Xavier Woods autograph used to go for $3, I would take his from his TNA days as Consequences Creed. After all I basically bought a case. Instead I was severely disappointed.Thankfully, I pulled a Joe, a while ago in when I did PackRip.com – Random Review: WWE Undisputed from PackRip.com.

It was a 90 card set, with cards 91-100 being hobby exclusives. In 11 boxes, I got only 1 full set. 1 full set. Do you realize how many random duplicates that leaves me? Misery pack giveaways are going to be full of Hogan cards now. Even if this was from 2 cases, that is horrible of Tristar who put out this crap, to do. 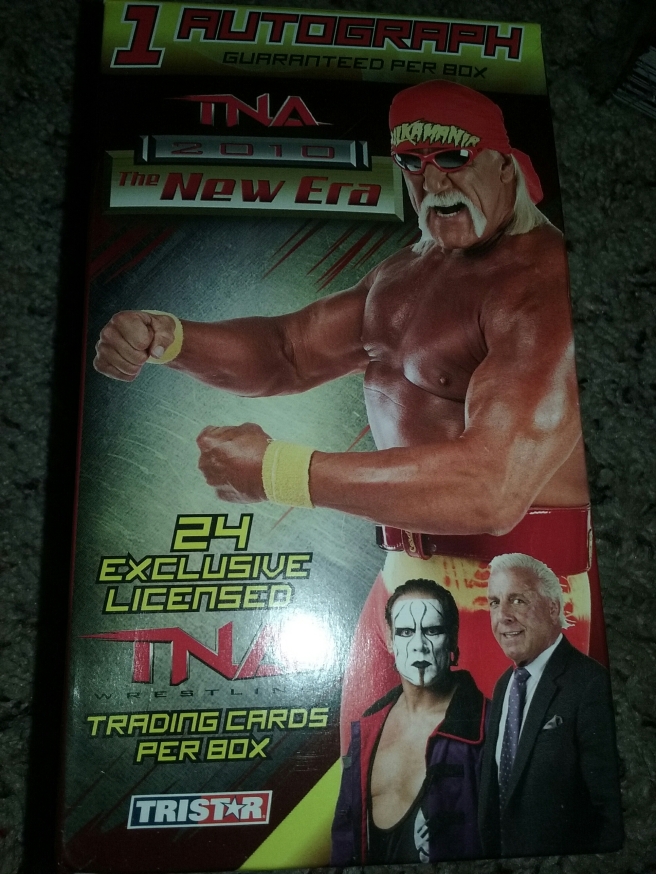 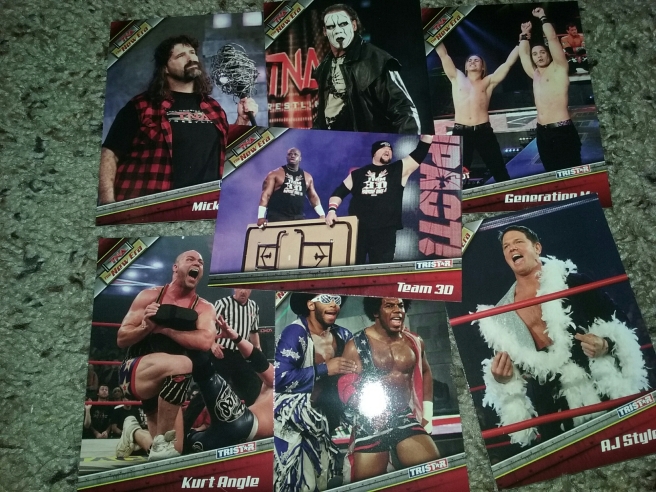 Let’s take a time out from the negativity to acknowledge that TNA does have some great wrestling, and has been a part of many wrestlers storied careers. Their storylines may have sucked in 2010, but the talent was there. Just look at where guys like AJ Styles, Young Bucks/Generation Me, and Xavier Woods/Consequences Creed are today. There is no reason why a company like this should have ever been on the brink of collapse like they are this year. I hope that the company gets their act together because they have given us some great wrestling, and awesome card sets. This is just a sample of what they have put out in their short history. 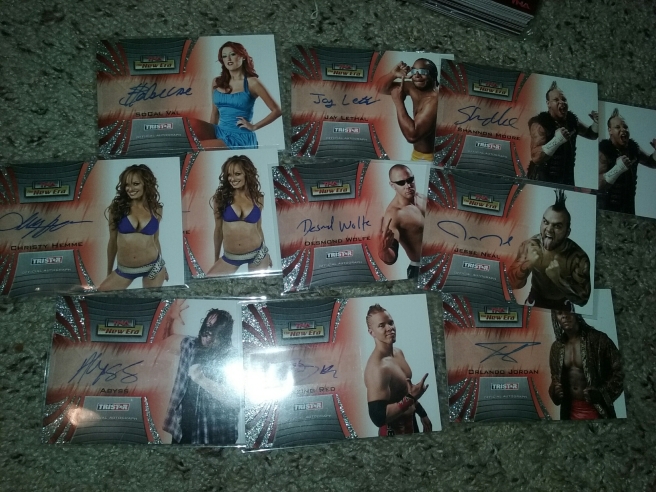 The first autograph I pulled was Shannon Moore and I thought “Cool, I can live with this. Decent wrestler, it can only get better from here.” Then I pulled the same card in my second box and realized that I made a mistake.
Of these cards, 2 are PC worthy and 9 I can live without. My PC worthy cards are veteran turned wrestler Jesse Neal, and the man who showed that it is okay to be yourself Orlando Jordan. Jay Lethal is kicking butt in Ring of Honor but, are the rest of these people doing anything relevant? I haven’t heard Jesse Neal’s name since TNA released him.

First off, I want to thank everyone who wished me a Happy Birthday on Twitter. The card community alone made it a memorable birthday, as I had more notifications than I do when I run contests. Thank you so much. I made a point to thank everyone of you individually.

Unfortunately, I didn’t get any cards for my birthday. I was so hungry for cards yesterday that I opened up a box that I didn’t think that I would ever open. A box given to me at graduation, by a girl who didn’t stay in my life if you catch my drift. I am glad that I did open it, because I pulled a redemption that expires this month. 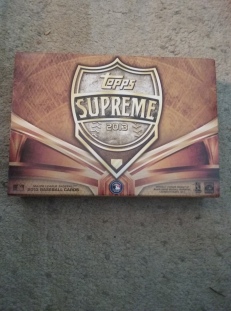 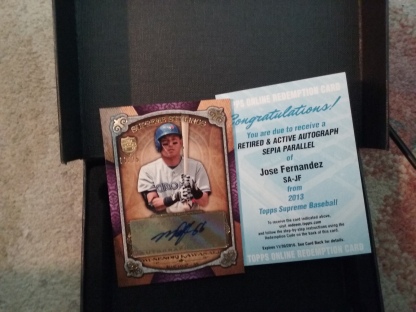 If you are interested in the Fernandez redemption, I will trade it for $40 Paypal, as I have no interest in keeping it. It appears to be in already, and is numbered under 50; 35 if I am not mistaken.

It was a decent box. If I would have opened it when I got it, I would’ve been ecstatic as Fernandez was alive and so was my relationship with the person who gave it to me. That is it for unopened boxes that I have. Hopefully I get a job or another girlfriend soon so I can stock up.