This weekend I tackled sorting my cards. I have 4 boxes that fit 3,500 each box and there wasn’t a method as to how they were organized. With it raining I and me feeling unproductive, I decided to sort them by sport. Below is a stream on consciousness over 4 days of sorting. Tomorrow, I will be posting some of my personal favorites that I came across. Also, a few will be posted on my Ebay for sale, and my SportsCardAlbum for trade.

I loved reading everyone’s comments about my entry yesterday. I didn’t realize how many of you have gone through the same feelings. Today, you won’t find anything buzzworthy. What you will see is my personal favorites from sorting; and in some cases the stories that come with them. Don’t worry, less than 400 words if you remove this.

Wally Szczerbiak  autographed floor piece, and a no name prospect, Earl Snyder, cut box score. As I Googled them to make sure that I spelled Wally’s name right, and whatever happened to Earl Snyder, I learned that Earl is older than Wally.

– I put this to the side because Corey Brewer is one of my many favorite players, and then yesterday he joined the Lakers. Go figure.

– I’ll trade you this for a Pedro Martinez card.

– 2 of my all time favorite Hall of Famers. I was a Tom Glavine fan the second I read on the back of his baseball card that he played hockey; even though I loathed the Braves as a kid. I learned to appreciate Morten Anderson after my best friend from Denmark made me realize that Anderson was born there.

– This was one of those random coincidences. I was searching during the week of Valentine’s Day and I found one from one of the most important people in my life who is now gone. I remember sticking it in with the cards. I do random things like that. I also will stick a five dollar or one dollar bill with my cards every now and then. I didn’t find any money.

– Speaking of random things, some old tickets from past Dodger’s games. Card boxes are perfect holders for stuff like valentines and ticket stubs. 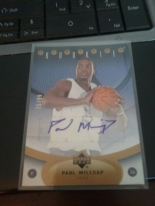 – One of my all time favorite pulls. I got a birthday box to open the year that Paul Millsap was a rookie and pulled this. Normally second rounders are throwaway filler autographs but I got to watch him grow and appreciate him. 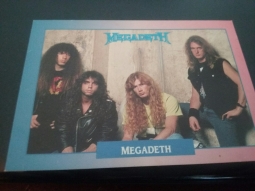 – For some reason packs of RockCards were always around. I remember opening packs of them as late as 2003 – they came out in 1991 it looks like. I did listen to good music as a kid but was never much for metal, with the exception of early Metallica albums – I listened to a ton of punk in middle school, Bad Religion, Epitaph & Nitro Records type music. Now though, Megadeth and Testament, are in my music rotation, and they have their own cards in this set. https://www.comc.com/Cards,sh,i100,=RockCards

First things first if you want a Misery Pack, I will sell you one for $7 Paypal friends & family, or $9 normal Paypal in the United States. Message me and say that you saw this post; my email is angrycardcollector@gmail.com – don’t send Paypal there as it isn’t my Paypal email. I have basketball, baseball, and football.

Reality, and also demand for Misery Packs, has forced me to start selling.
I have listed a bunch of cards on Ebay. If the prices seem high, it is because I used COMC for comparison pricing. I don’t really go by the last one sold, if one isn’t currently actively for sale. I have been working on a rant about this that will probably be posted next week. I stand by this, as I have had to pay a premium for some no names in my Prestige collection.

http://www.ebay.com/usr/pandanwh – I will trade or sell any cards outside of Ebay if you message me.

I have a bunch of cards available for trade. You can find them here:

https://sportscardalbum.com/u/angrycardcollector – these cards are only for trade and not for sale. I am not even saying that because I am trying to circumvent from having to pay for premium on Sports Card Album. Most were given to me, and the rest are not worth much to sell to begin with.

As for what I want. I am pretty much exclusively working on attaining every relic and insert for Prestige Basketball 13/14. I have been working on it since the product came out. If you can fill in the few gaps that I have let me know. What I have is here: https://docs.google.com/document/d/1283IVFB0Z4vrxZQWJo944UWIcoC5Lc5aMZjJ_9wGySs/pub

My big fish right now that I am looking for are: CJ McCollum Prestigious Premieres autograph, and Cazzie Russell True Colors jersey.

If you don’t have Prestige basketball for trade and want one of my cards, I would be open to Dodgers, Carolina Panthers, and hockey players from Denmark.

I am selling a couple of cards that are accidental duplicates to my collection from COMC. You can find those here: http://www.comc.com/Users/pandanwh,sn,i100

On the plus side, selling will make me a more well rounded collector. It is not a bad thing that some of my rants will apply to more people.

First things first. Misery Packs are for sale this weekend. You buy them on Ebay or  by messaging me on any platform. Buy them here on Ebay.

Now, contest time. Winner gets the card and some others, meaning you get a Misery Pack. (Note, you will get way better cards if you buy a Misery Pack.)

I didn’t have idea what to write on here this week; then today happened. So I sold a card on Ebay; well redemption code. I was all set to send the code to the seller, but then I couldn’t find the card.

Timeline of thinking I lost a card that I sold:
12:45 Look where card has been in my mind for past 10 days. It isn’t there. No big deal, there are 2 other places it could be.
12:55 Oh crap, not in those places. Time to look in other places.
1:15 Not anywhere else, so I go back and check the original 3 places over and over again. Did I mention that all of this is confined to my office area, only a 10 foot radius? Time to sort through files. My body starts overheating from adrenaline. Start praying.
1:30 Who am I kidding? I know it isn’t in the files. I think it got thrown away. I go to my car anyway to look. I just put a stack of cards in there to donate and that stack was too close for comfort from where the sold card was in my mind.
1:45 Not in the car. I go back up to desk area and start cleaning the only area it could be in. I guess this is a good side effect. Another prayer; I am a religious person to begin but this is overkill.
2:05 I send a panicked message to buyer. I am super embarrassed and my conscience is getting the best of me. This sold for a buck plus; and I don’t want him to think that I am having reservations. I don’t want him thinking that I used the code for myself. If I was in the same situation, I would be annoyed and think the seller dicked me on purpose. My thinking: maybe if I send this message it will lead to me finding it immediately.
2:15 Did it fall behind my bed? More cleaning.  Keep praying.
2:25 Check pockets and dirty laundry. Nope.
2:30 Kids come home so I can’t focus on stressing about the card.
3:50 I sit at my desk, to work on paper work. I decide to go through a stack of cards in box, that I am on the fence about selling. I didn’t go through the stack because I don’t recall touching it in this short year – the reason why I never went through it in the first place. The last card is what I was looking for. It was in the area that I was searching all along.