I just checked my calendar and am thankful enough to have a busy week so I am posting this tonight. As readers know, I have a bad tendency to sit on maildays. In this case, sitting on a Christmas ‘gift’ worked out. I was hungry for a box of cards because I didn’t get any on Easter. Thankfully I had my 2016 Goodwin Champions box to help, or did I. Before I move on I want to thank GoGTSLive, the best sports card show on the planet that airs every Thursday for sending this me. This low budget collector got a box that I have always enjoyed because of them. Unfortunately I got skunked on the holiday two times over. Fortunately a bad box of Goodwin Champions is still a good box.
I really only issue with the box as you will see. 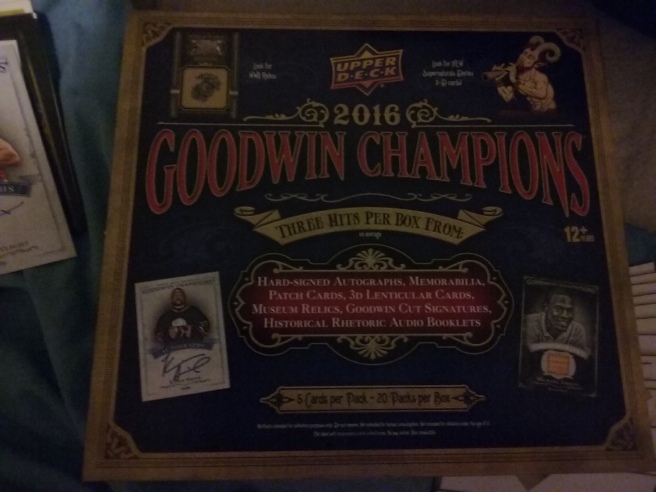 Going to start off with the bad first. The best card from the box wasn’t even a hit but this Justin Gatlin Lady Luck cloth mini. Beautiful card but the way that it was loaded in the pack caused it to be damaged. The right side is so beat up that it looks like it was shipped without a toploader in a plain white envelope. The card came out bent as a result of the placement in the pact, but after being sandwiched between all the decoy cards to try and smooth it out, it is better. Beautiful card. Actually if you look at the card for sale on COMC it looks worse off than mine: https://www.comc.com/Cards/MultiSport/2016/Upper_Deck_Goodwin_Champions_-_Base_-_Cloth_Minis_Lady_Luck_Back/71/Justin_Gatlin/11561047 I am going to be including a ton of COMC links to show comparable cards in this post, none of which are mine. Pictures don’t do the cloth justice. It had potential to be a real beautiful card. 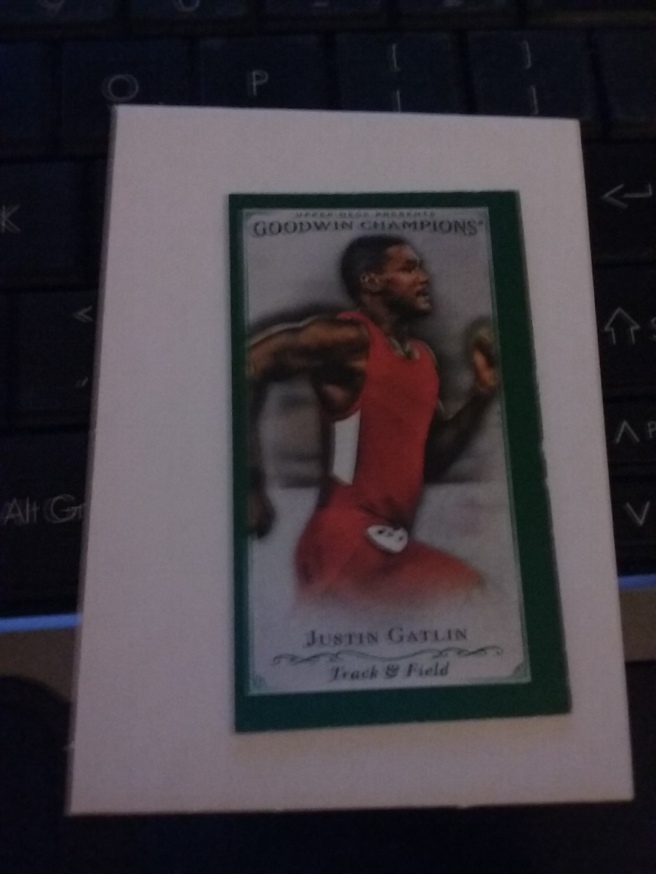 Let’s move on to the hits. Both nothing to boast about. A relic of a golfer that I have never heard of and a autograph  Canadian Rugby player who I have definitely never heard of.
Like the relic? You can buy one just like it for 95 cents: https://www.comc.com/Cards/MultiSport/2016/Upper_Deck_Goodwin_Champions_-_Memorabilia/M-RS/Robert_Streb/11561816
As for the autograph, well you can buy a similar one for 90 cents: https://www.comc.com/Cards/MultiSport/2016/Upper_Deck_Goodwin_Champions_-_Autographs/A-JM/John_Moonlight/11559566
So you can buy the autograph and relic card that I pulled from this box for less than well, insert inane item here – I am sure that you can think of something better than me. In fairness, I could easily see myself taking a dollar flyer on a bid board for these exact cards. The autograph card is even a definite personal collection item. So is the last hit in the next picture.  The black cards in the picture look nice but that is all they are. They look too nice to be the 30 cent base cards that they are: https://www.comc.com/Cards/MultiSport/2016/Upper_Deck_Goodwin_Champions_-_Base,sc,p2,i100
Interestingly if you look at the ‘hits’ for sale from this set, I pulled probably 2 of the cheapest 10 for sale. I hate that I think that way now. 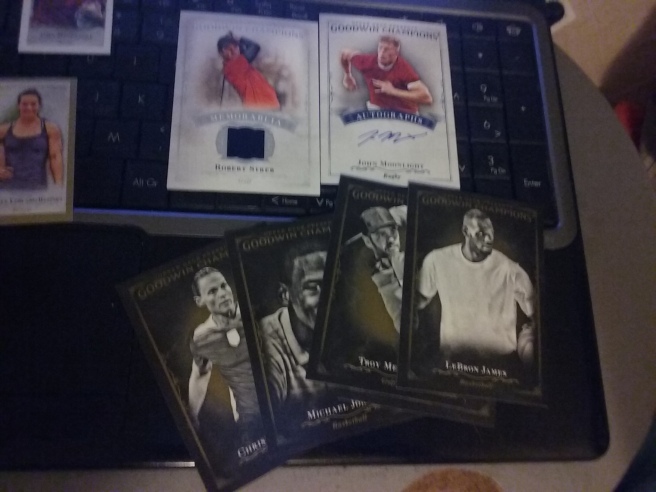 The last hit was a patch card unique to the product. I was ecstatic to pull it as I have never seen one of these in person. Unfortunately I realized it is because I have been so focused on my other collecting endeavors, and I could’ve scooped up one of this at a reasonable price if I wanted. Just like this one that you can get for $3.30 https://www.comc.com/Cards/MultiSport/2016/Upper_Deck_Goodwin_Champions_-_Origin_of_Species_Patches/OS-209/Tier_1_-_Moeritherium/11568861 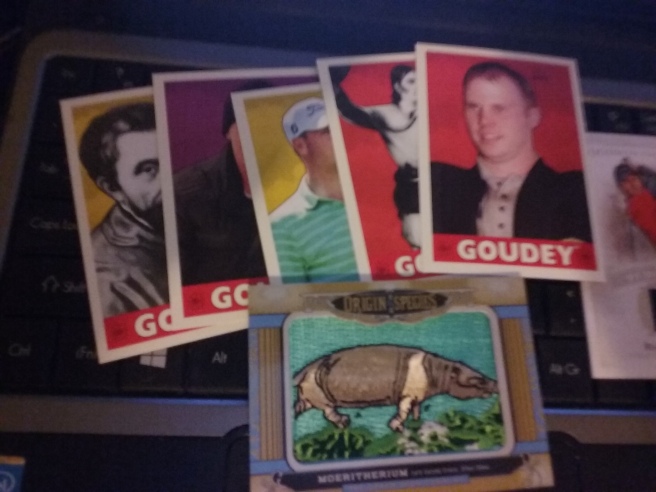 This box was giving on one front: the amount of decoy cards in the box. Take a look at this crazy stack: 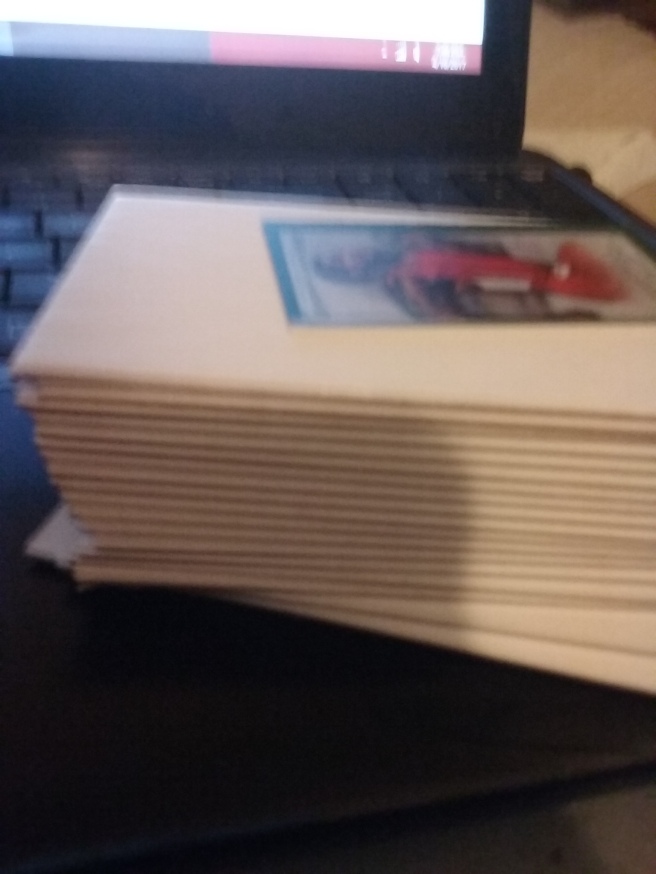 The base set and inserts are really great. I would love to put together a base set of this, and insert set for that matter. 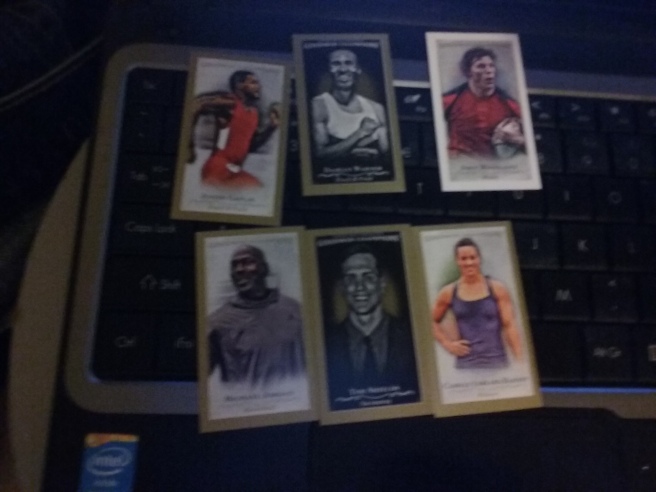