When my COMC shipment came in, I got some good stuff. Mainly, I was able to finish up some of my Prestige sets. Only half my haul was Prestige. The rest was stuff on my wishlist, stuff from my favorite teams, and other goodies. Today I am showing you the odds and ends. All were picked up under $5 and almost all fall in the impulse yet cool category for me.

Above: My Danish personal collection items.
Below: Took a flyer on an over-sized Chrome jersey card because I wanted to see what it looked like. TNA autographs from Earl “I Screwed Brett” Hebner, and Jason Hervey of The Wonder Years. Also Skylar Astin. 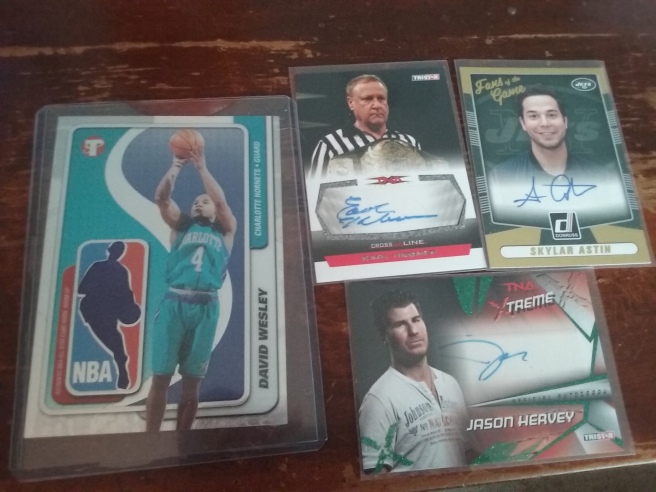 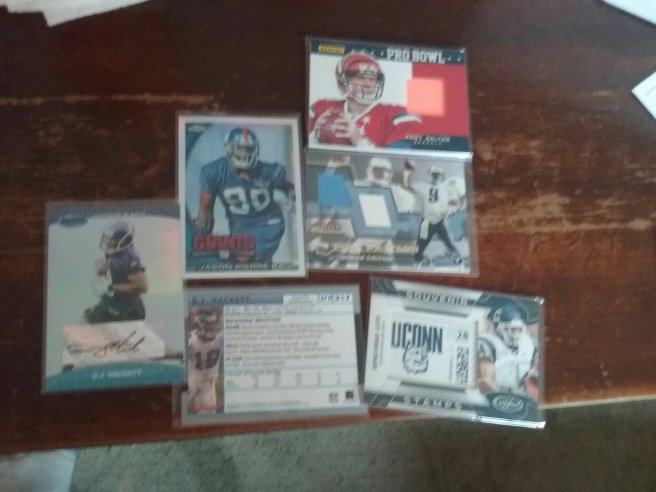 Top: All but the McNair jersey and goal post pad are from colleges that I have a connection to. I wanted the McNair because goal post pads that sell for under ten bucks are a deal, plus I like unique cards and a goal post pad is unique. I love the UCONN stamp on this Donald Brown jersey card. I wanted to make sure that I had a Jason Pierre Paul rookie card in my collection as he starred for two years at my community college. My university doesn’t have a football team but they did. DJ Hackett was the last player to make it to the NFL from California State University Northridge. I made sure to get a rookie card that mention our football program.

The original booklet card, a Bowman jersey from Adam Wainwright. Kirk Manwaring autograph is the other card. Sorry for the blurry picture.

Card below is a nice story. I missed adding this card to the shipment and it was the only card left in my account. When I realized it, it was a day or two after and I emailed COMC asking if they could help me. What I didn’t realize was that they shipped it separately than my big package. I should’ve paid the shipping but they gave it to me free. Even though I asked to get this shipped a few days after this came in a day before the big package.  Dieng is a sleeper in my book. If he was playing Los Angeles or New York, he would be a bigger star but he is solid starter in the league; and a young one with room to grow at that. I like players like him and Nicola Vucevic.