Between my all time favorite team being in the World Series and catching a nasty bug despite getting my flu shot, I have been on radio silence for the most part. You see my mentality when good things happen to my sports teams is to maintain radio silence. I don’t watch pregame shows, talk about it, or watch any news coverage of it until a championship is in hand. Anyone else do anything similar?

Speaking of my radio silence, I did post a contest on Twitter recently. Initially I wanted it to be a weekend thing but my bug changed plans and made it a World Series contest. I included a signed card from Blake Rutherford from when I met him – you can read about that adventure here: How was your day?
You can find that contest here:

You know the drill. RT this post & follow me for a chance at a Blake Rutherford #MiseryPack
Ends when World Series ends. pic.twitter.com/os4HuEcfKJ

Shut up you stupid idiot and listen to this. I am about to tell you of an autograph from a past, present, and future great. Someone who has won every major title in the WWE/F. Someone who is proof that when life gives you lemons you make lemonade. Someone who was my personal favorite wrestler when he was in WCW. He just so happens to have a band and is into awesome music. He is the one, the only: Y2J, Chris Jericho. 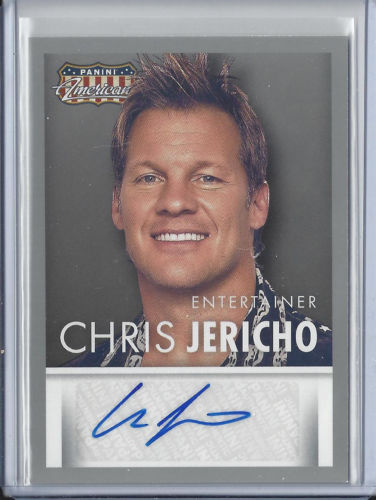 I have to be honest, I didn’t think that his autograph would ever be in the my wheelhouse but I stumbled across it by accident and was shocked at the price of them. For under ten bucks you can get one of his cards. Don’t believe me, check out eBay: https://www.ebay.com/sch/i.html?_from=R40&_sacat=0&_sop=15&_nkw=chris+jericho+auto&rt=nc&LH_BIN=1

Its not often you can get an autograph from an award winning a-list actress in any product. Getting said autograph for under $20, you have to be kidding me. Where do I sign up? Today’s undervalued cards is autographs by Joan Cusack. You can buy her autographs for as low as $14.99 plus shipping on eBay right now.

I have been sitting on this one for a month or so and in that time all of her cards sold on COMC. She may not be a ‘Benchwarmer’ but she in my book she is better. I would rather buy Cusack’s cards instead of a pathetic no name model who just so happens to take care of her body and knows how to apply make up. I don’t care who it is, give me a talented actress a thousand times over a Benchwarmer.

To recap: award winning, a prominent character in Disney/Pixar’s Toy Story, talented, and still has many years to earn more achievements. It is time to fix this market slight. 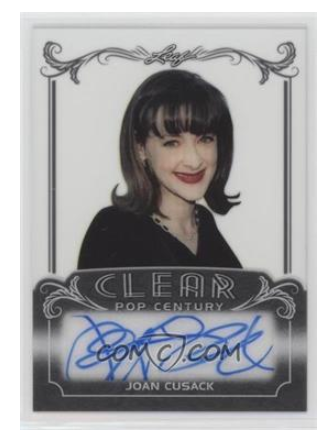 Congrats to Joel on making it to a year with the Loot Locker. I think its safe to say that the whole community was pulling for the Loot Locker to be a success and it looks like it is.

I wanted to help him celebrate so I bought a Loot Locker for myself. Being that basketball is the main sport that I collect collectively I bought a basketball locker. In it was a pack of Excalibur, Aficionado, and Totally Certified; all from 2016-17 season. 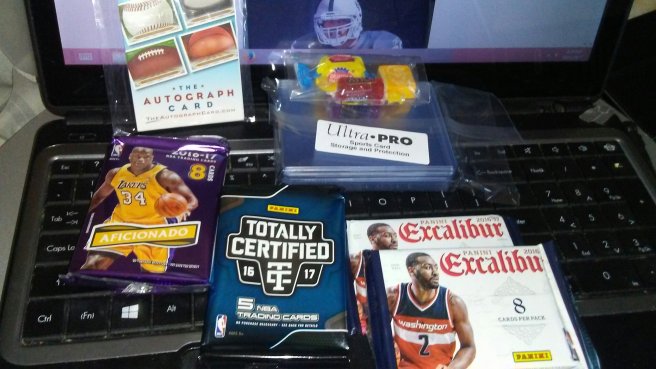 I am pretty sure the second Excalibur pack was a bonus. The Aficionado pack was very thick. I thought that I was going to hit a patch. 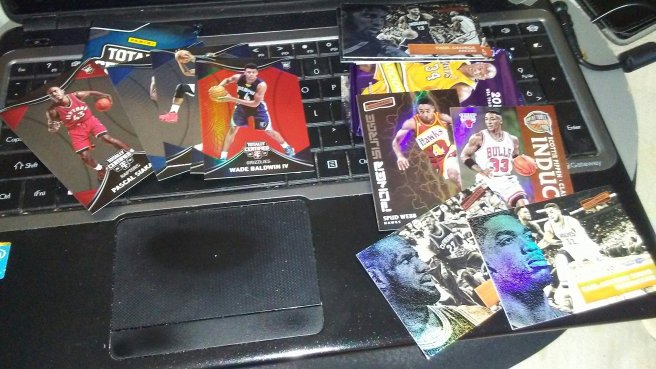 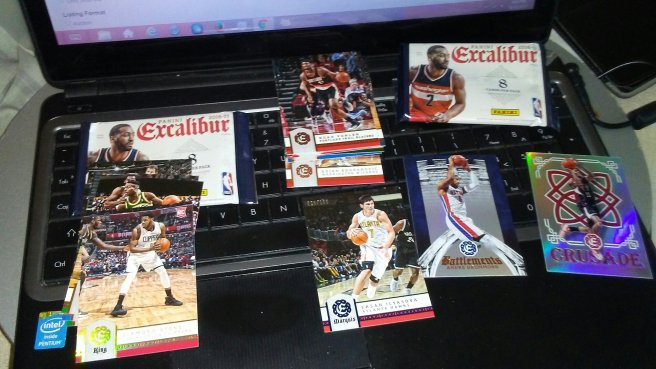 I didn’t get any hits per se. I did get a bunch of parallel cards and two spacers. The Diamond Stone rookie is numbered to 10. He’s at the stage in his career where he is probably a D-League player but he is only 20 years old so he can still turn into something.

I didn’t want to do another hot pack review. Ebay suggested it to me and I put in a low bid. Next thing I know, I got it. Altogether I spend four bucks and change with shipping. Worth the flyer, I suppose. 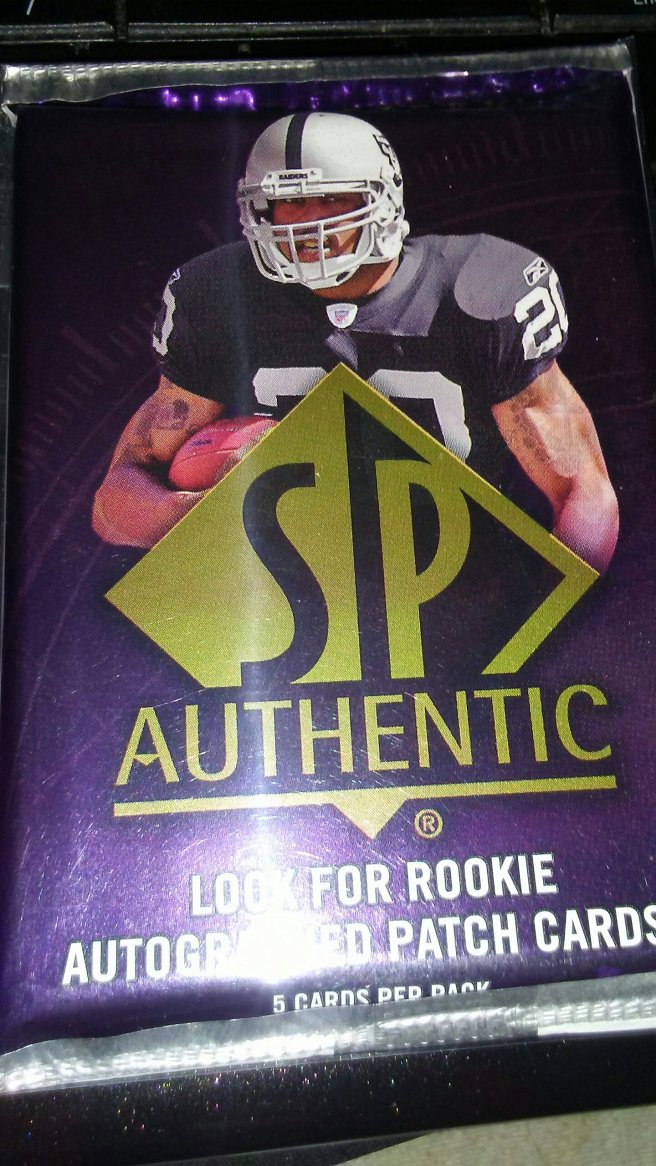 Here is what I got: 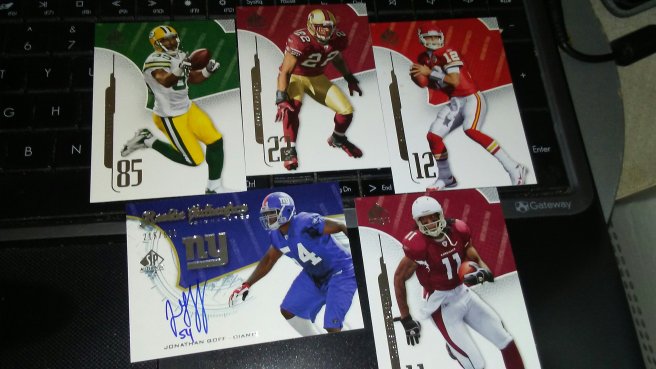 An autograph that isn’t even worth the pack. Some things are better left a mystery; like this pack.

I had Ebay credit burning a hole in my pocket and it caused me to make an irrational decision on Ebay. Nevermind, let’s say I did it for the sake of the site. I can say that I bought it to test blasters on Ebay from a seller who isn’t a reputable dealer.
Truthfully between wanting a box with this great NFL rookie class, the look of Absolute base cards, wanting the Blitz pack code, and the price falling into my lap, I took the chance. I paid about $12 with free shipping. 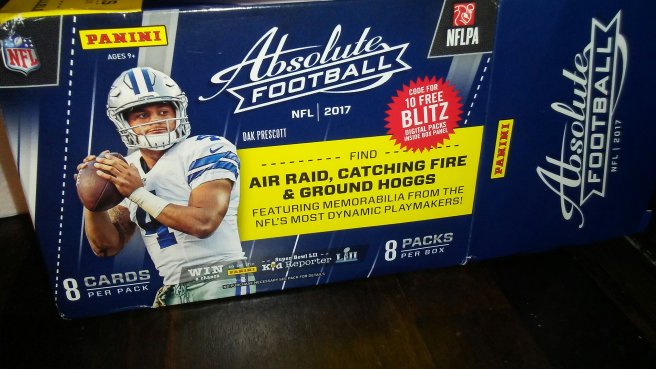 Let’s get this out of the way, blasters of Absolute have been less than stellar. It feels like they took a set for hit chasers and made it one for set chasers. If I would have realized this, I would’ve collected Absolute instead of Contenders; especially because Absolute base cards are beautiful this year. I don’t care if McCaffrey busts, I will be stocking up on his rookies, and every Panthers rookie, because the cards are beautiful. I don’t know how you feel but when I see my favorite teams colors, I get a little excitement in my heart – Panthers, Dodgers, and the occasional Grizzly do it for me; I have opened enough basketball so I should know that feeling. I have seen people buy multiple blasters and go hitless. At $12 it was worth the price of one of blaster boxes from 10 years ago when they had blasters at this price point.
Unfortunately the free shipping cost me. The seller showed little packaging care and sent it just covered with brown paper. That Blitz code was nothing special either. I thought that I would have to pull a card inserted in packs but the code was written on every pack – my heart wants to share the code but my head says not to do that to Panini. 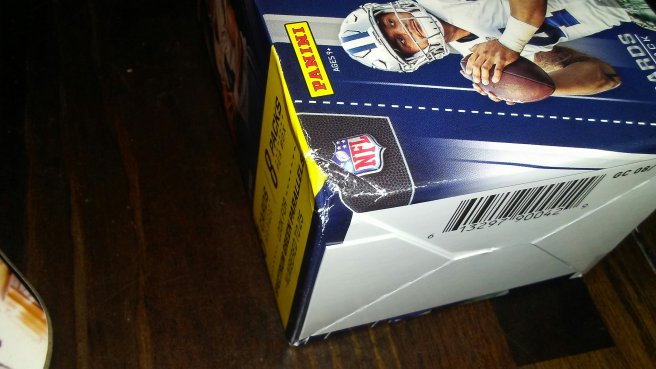 One pack was extremely damaged. Unfortunately it also included a rookie parallel in the top 15. Here is what I don’t get though. How can one pack be damaged and not the others? I wonder if it was via pack searching on the seller’s part. The bottom corner is dinged severely and there is fraying in an L shape in that whole said bad corner. 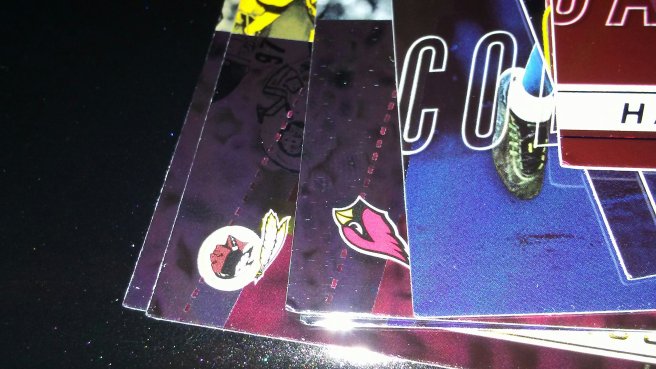 These are beautiful inserts though: 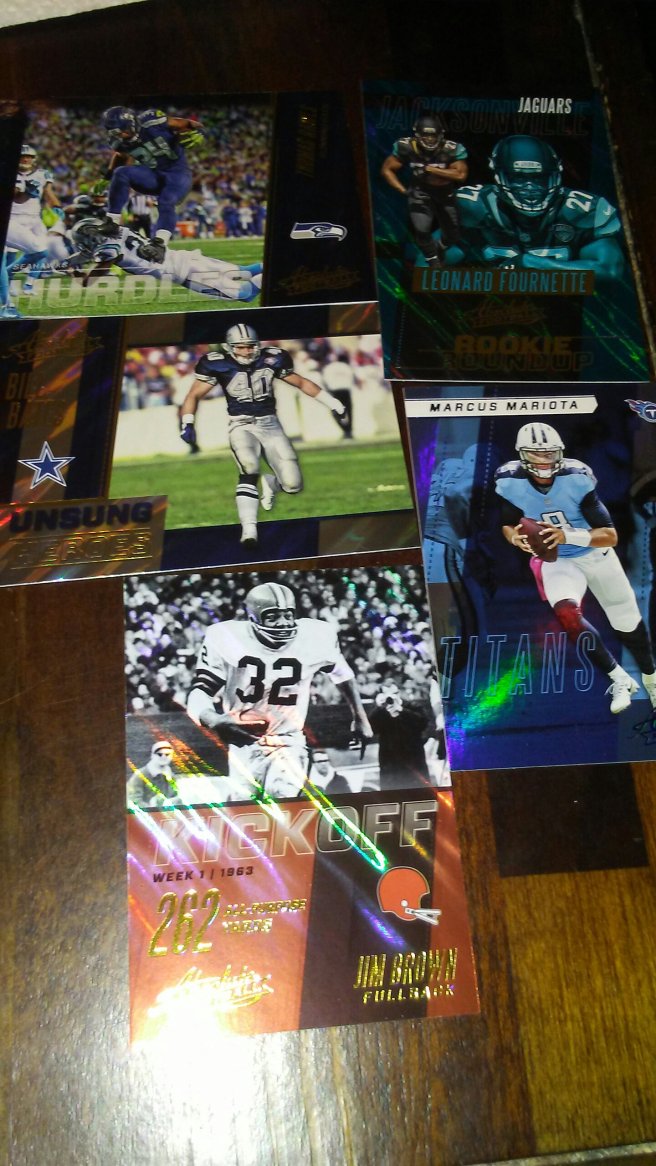 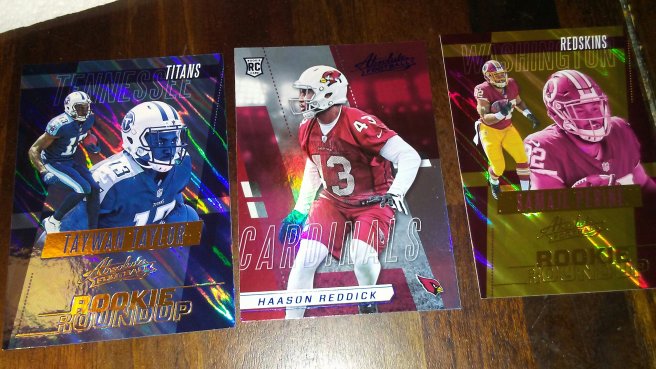 I will be more than happy to share the name of the seller via messaging. I left him positive feedback with a scathing comment on the packaging. Hey I got what I paid for and he didn’t offer to refund even a little bit of money. I made the mistake so you don’t have too. Don’t buy blasters on eBay unless it is with a reputable dealer, not an average Joe.

You know that crappy backup catcher whose autograph you used to always pull fifteen years ago? What about that journeyman infielder who was lucky to even have an autographed card to begin with.
Well once these guys turn into managers they are worth something. Once they turn into managers who got their team in the playoffs, their value should skyrocket. Or at least you would think.
Currently you can buy autographed cards from the potential Manager of the Year in both leagues for under $5 each if you look hard enough. I snatched up 2 A.J. Hinch cards for $2 last weekend. Torey Lovullo’s autograph was double that at $4 so I only got one. Managers cards values have been going like hotcakes in the recent hobby environment. Try getting a Joe Maddon or Bruce Bochy autographed card. That will cost you at least $40 each.