Last week I did a low series blaster, so how about a high series this week? For those of you that follow me on Twitter, you will know that I opened this a few days ago.

Tons of duplicates for a blaster. pic.twitter.com/4usqnmeulw

Interestingly I hit a Shelton Gibson autograph, the last time that I opened a similar box, which was in July. So this means that the last two blaster that I opened of both and hi and low, I pulled autographs that I already had; as you may have read from last week.

It’s Ash Wednesday and as a Deacon that means that life is good; even if Ash Wednesday wasn’t celebrated at my church this year. Anyway, this year I wrote down a list of things that I will be giving up this lenten season and cards with the exception of a final pack of Donruss basketball and any cards that I set Ebay alerts when they go up for sale for my Prestige collection. Not that I need to defend myself but I told myself that I would buy a final pack of Donruss when I saw how close I was to a finished set, a few days before making my lent decision. I gave up some other things as well.
Anyway me giving up buying cards* isn’t a sign that I will not be posting on here. If anything, that is a commitment to what I have in my arsenal and haven’t opened yet. Since I didn’t have a Valentine to buy me some cards, I opened a box for myself. Before I move on, that reminds me, I posted a #MiseryPack contest today that ends Friday. Check it out:

Since I know that some of you are miserable today. Here is a chance at a #MiseryPack r€+w€€+ & follow to enter. Ends Friday night, the 16th. 2 cards numbered less than 100 and 1 autograph. pic.twitter.com/i8A1E2ggnI

So while I have better things, I was in the mood to open some bad Hit packs. I think this had to do with me falling asleep while watching a retail repack break on Youtube last night. So today I opened a blaster of Premier Draft 2017 Hit Low Series. Naturally these do not have the cheap packs that you find in repacks. I hope this is the wave of things to come if this means that we won’t see them in said products. 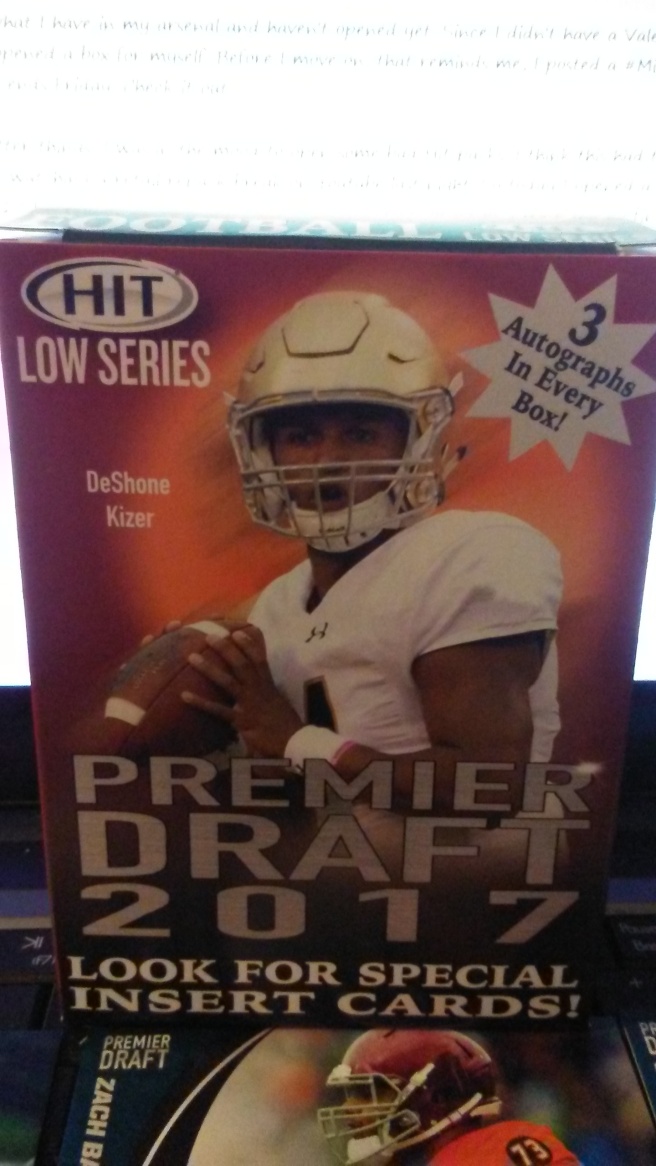 The autographs:
Zach Banner – 4th round pick who was cut by the team that drafted him, then latched on with the Browns. Before I researched him, I was happy with this pull anyway because I love collecting offensive lineman.
Garrett Fugate – now in the CFL but hey, at least he latched on somewhere. I actually pulled his autograph in my birthday box. Check that out here: Random Review: Birthday Gift Card 17 Hit + hockey packs
Cooper Rush – Cowboys backup quarterback so not a bad pull 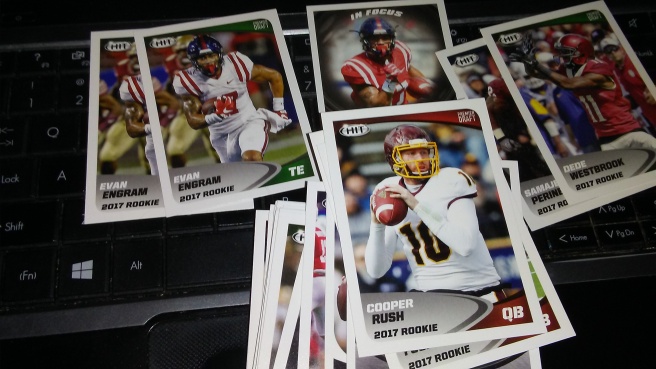 I was surprised to see a duplicate card in here. While there may have been more, I don’t mind having 2 Evan Engram cards. Since I like him as a player, that is the only reason that I noticed. I like collecting the base sets of these cards so I would prefer not to have duplicates. Being that they put in 4 packs, albeit one of which is all inserts, I would rather have the cards sequentially numbered in the packs.

Life is beautiful. In my life I am blessed that I have so many different families. I have my friends, family, pets, church, and card family. As much as saying that may confuse one, none of those felt wrong to type. People underestimate the power of a hobby family but it is very real. Right now in the “Sportscard Scammers Exposed” Facebook group, they are showing a reason why the #CollectFam is strong. You can find the group by clicking on what is underlined in the past sentence or by going here: https://www.facebook.com/groups/135534423676517/ It is not a public group and you have to be approved to join.

So what is happening in that group? Well you see a member of it recently lost his mother in law and there is a huge razz going on with all the money going to support his family. The razz is Wednesday, tomorrow, so get on it quick. Spots are only a dollar each.

I love these green flood parallels. Can't believe they aren't worth more. pic.twitter.com/7khGORdvpH

Could do worse for $10. I would rather have 2 fat rack packs of the product at this price though.

Even though I pulled some good stuff, my guess is that this is a flash in the pan and other packs have a chance to be duds. I think anyone will take 2 Ben Simmons inserts from one of these. It is not shown in the picture but the Retro parallel really shines.

I had a post all written out and hit the save button instead of the publish button. So I thought this was published Wednesday, and was surprised when I went to publish round 2 of it. I am sick and on antibiotics for the first time in ages. It is nice realizing that I haven’t need to take antibiotics for anything in the past six to ten years, so I guess that I was due.

Anyway on Tuesday I went to open a box of 2013 Panini USA Champions.

I bought the box for $30 all the way back during Blowout Cards 4th of July sell last year. I didn’t open it until last night. I will finish the box this week.

While it is nice to have nice things, Kris Bryant just doesn’t do anything for me. A lot of that is coming from the Dodgers fan in me, and the Cubs being our biggest rival the past few years. That said, I was in awe. I put the cards down, laughed and enjoyed the moment. Pulling that card felt good.

Today I finished the rest of the box. 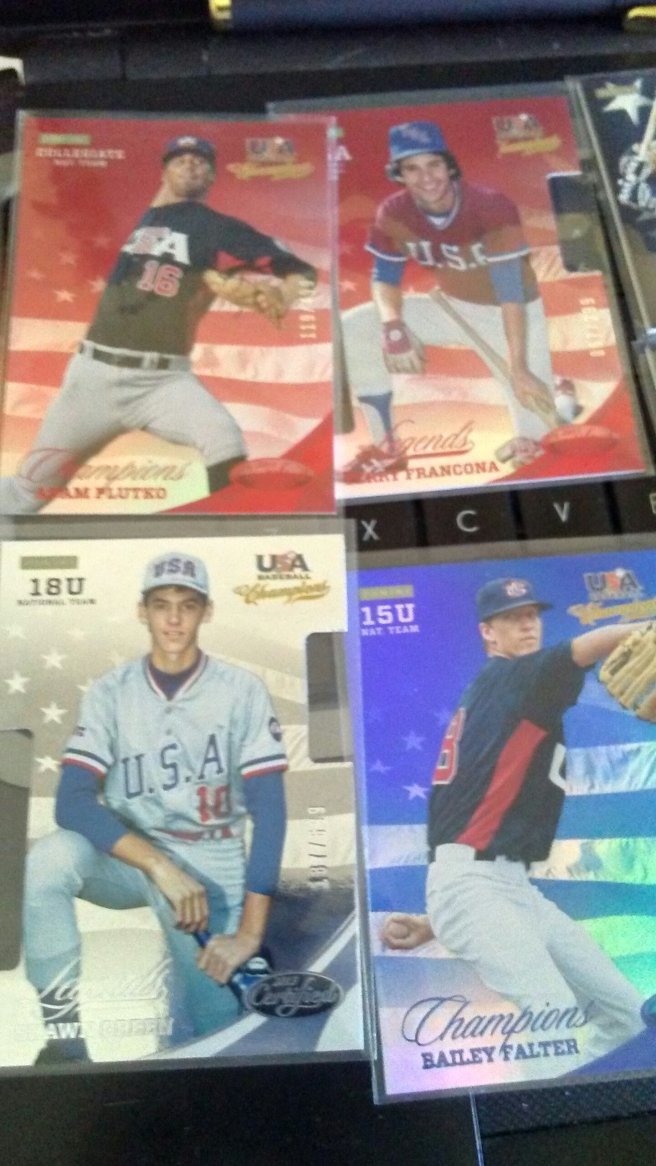 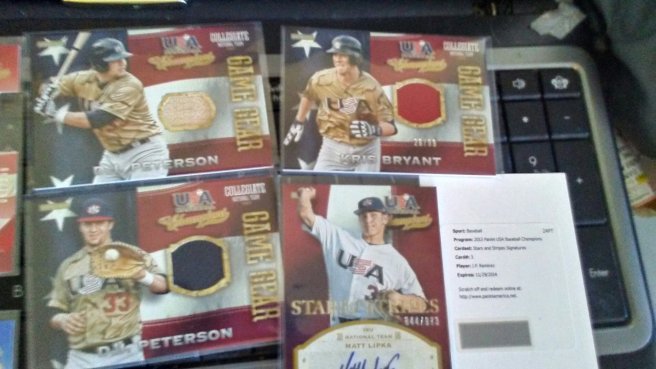 According to the Bryant jersey card, it is a prime piece.

Before you go running out and buying a box for yourself, I cannot stress enough the huge bust factor at play here. Every non Bryant card in this box is dollar bin material. I was expecting to be excited about this box because of the base and players but if you take away the Bryants, I am not a fan. I was looking forward to the base cards because it is full of my favorite players, but the collation was insane. In one sense, it was truly random but I would like to see some collation. I have 3 of some base cards from this box but don’t have a set. This is a great boom or bust box at the price but I bought this for the fun rating and that kind of failed me. I was hoping for any combination of Mark McGwire, Will Clark, George Springer, Blake Rutherford, Terry Francona, Troy Glaus, Jim Abbott, Mike Mussina, Jeff King, Tommy Lasorda, Jesse Winker, Corey Seager, Robin Ventura, Reese McGuire, I can name about 40 more names…

Does anyone else use passive aggressive positive feedback on Ebay? Just got slammed for it via messaging from the seller. I know I am a jerk but if you charge me $7 combined shipping on a $4 max purchase, I don't feel bad.

So here is the deal: I leave passive aggressive positive feedback all the time to show sellers that their slights don’t go unnoticed. Recently I won 7 auctions from the same seller. Some auctions had 3 cards, some had 1 card. I knew ahead of time that I was going to win multiple auctions so I messaged him asking his combined shipping price. He said 50 cents per auction after the initial $3. So for 12 cards I was charged $7 shipping. Shipping at most would have been $4. I didn’t message the guy, but I left said passive aggressive feedback on 3 or 4 of the 7 auctions calling him out for the shipping prices. He messaged me after it.

If this Ebay user is on Twitter and you know him, feel free to tag him in this. I would love to be put in my place. pic.twitter.com/u7qxTtppDt

His parting shot was this:
“lol good talk over a 20 dollar deal… remember next time u sell shipping fees went up. next time don’t bid on something that u already know the price of. That would make everything easier for everybody including u as seller and a buyer… have a good night and enjoy your cards!!”

As much as I wanted to respond and call him out for handling this $20 situation like this, and then suddenly saying it wasn’t worth it because of the price, I just didn’t care. I was passive aggressive because I didn’t want to message him in the first place.

So do you have a take on this situation? We all know that sellers who charge an arm and a leg for shipping like this are bad for the hobby, but how about how this situation was handled? Is passive aggressive positive feedback alright to do or should I have messaged the guy in the first place? Was he wrong for how he handled it? Do I need to be put in my place? Do you leave passive aggressive positive feedback?