For those that don’t know, taped to some Hanes products was a pack of Michael Jordan packs. I initially passed on these, only to find myself buying white shirts without a pack a month later. Well a few weeks ago, someone at church gave me the pack that came with their purchase. I told them that if for some reason I pulled a Michael Jordan auto, then I would sell it and give all the money to the church. Well as a Billy Bob Thornton character once said ‘wish in one hand and sh*t in other, and see what comes out first.’ I think I have been looking for an excuse to use that line for years on here. Anyway, check out what I pulled.

Was given this by someone at church. So my luck is your #RandomReview. .@UpperDeckSports After I eat lunch and wash my hands, let's do this. pic.twitter.com/Cn5ctCbJYS

Despite being a huge basketball collector, Michael Jordan has never been my cup of tea. These were awesome for the nostalgia factor as the 90s and early 2000s Hanes commercials were fun.

I didn’t see any of these on YouTube so I thought that I would add one. I have opened about 6 of these. These are a fun rip for any college football or Notre Dame fan.

So I am not a believer in the Bowman mega hype. I don’t understand why people are buying every box, especially when there is 20 of them. I feel there a false sense of hype. That said, I do like the collecting baseball cards, love baseball, and don’t mind the occasional prospect product when I come across it.

I somehow found myself at Target twice in 4 days and both were loaded with mega boxes. On my second time, I figured that I would grab one to see why the hype was about. Plus I do like the product, I just don’t like the hype and the way people are reacting to it. To be honest, I would have grabbed some and sold them at cost if I had any savings.

The very last pack, I pulled a green auto of Jordyn Adams from one of the mega exclusive refractor packs. I am open to selling it.

If you come across it and can only grab just one or two, this is a solid product. Right now I feel that hype is the only reason you will get a return on investment. Once that dies that down, buy it as a fan.

#RandomReview time. I like past versions of this so much that I felt it deserved a second chance. Now if I get points, I will live up to my name. pic.twitter.com/P6nskmNhsl

Even though one guy isn't even minicamp and the other is a 6th rounder, this is what I wanted from this product. I meant it when I said Jaquan is my new favorite player. I will be rooting for these guys; and not because I flip because I never sell my cards.

Someone on Twitter is doing a ‘Better than a Blaster’ series. I recently received a $25 gift in the form of COMC credit. I thought that it would be worth sharing how far the $25 went.

I purchased $2 worth of Deathlok cards. Most were numbered. No need to show them.
Now at $23 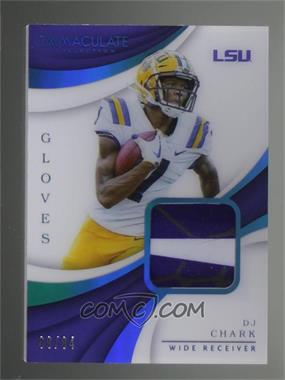 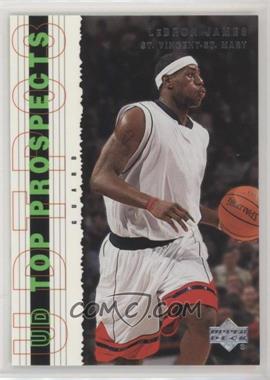 2018 Panini Absolute – Head to Toe #HT-15 – Dede Westbrook /93
Purchased for $2.78
Now at $15.01
Helmets are not easy to put in cards. So a piece of one for a player that I think has potential; heck yes. This is a gift and I try to buy things with them that I wouldn’t normally spend money on. This qualifies. 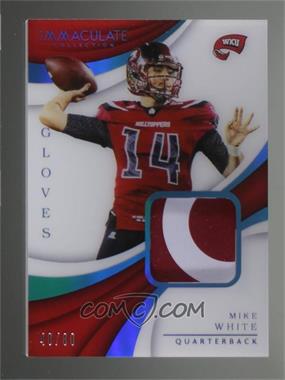 2018 Panini Immaculate Collection Collegiate – Immaculate Gloves – Prime #20 – Mike White /80
Purchased for $4.20
Now at $8.86
I already have one of these cards but these cards are so beautiful in person. As you see, this is my second purchase from 2018 Immaculate and I can tell you that they are quality cards. Both are players that I am stocking up on for my personal collection. 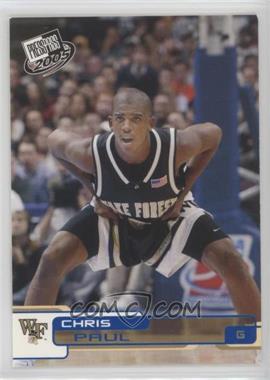 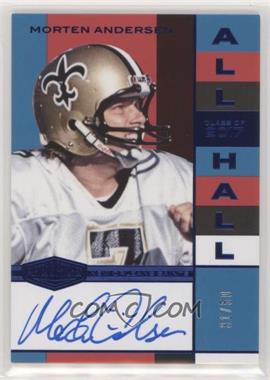 2018 Panini Plates & Patches – All Hall – Blue #AH-MA – Morten Andersen /50
Purchased for $6.00
Now at $2.27
I made a point to grab an autograph that I normally wouldn’t grab. It was between Morten Andersen and Alex Verdugo. I went with the one that I have been chasing for longer. 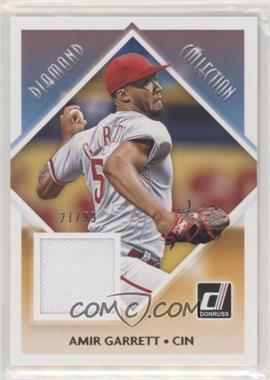 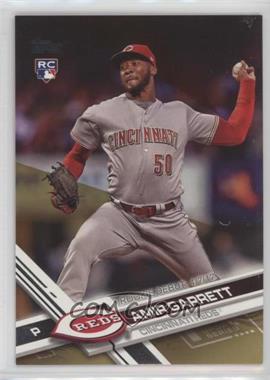 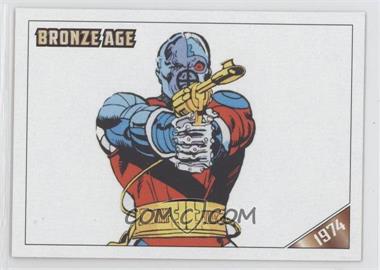 2012 Rittenhouse Marvel Bronze Age – [Base] #31 – Deathlok
Purchased for $0.92
How is that for perfect?
This is one of the rare cards that has my uncle’s name on it. It is not shown above, but he is credited as the creator on the back of the card.

My Contenders blaster. I am enraged at getting points in Contenders; especially when checklist is 90000 signers long. pic.twitter.com/Cts8jlkO5d

I was originally going to have this be a few sentence ‘Random Review’ like past ones but this took a life of it’s own. Instead, you are getting a rare ‘Angry’ post. I am so Angry that you aren’t getting a picture of the box because I destroyed it.

Readers of this site know that I love Contenders Draft Picks football. In 2017, I put together all the non auto sets. I also have a healthy chunk of the autographs down as well. This year, I really liked the design of the product. I wanted 2 of those autographs in my collection like the box promised. I would have much rather pulled a redemption than points.
This leads me to the following: I like pulling autographs of random people. That is a selling point for me. This is a time where a lot of hits sell for cheaper than boxes, and even packs. If I wanted an autograph of a certain player, I would have bought it. I am not pissed that I missed on a Daniel Jones card, okay I am mad about not pulling him because I like him, but I am not mad that I missed on Joey Bosa or Dwayne Haskins; I am mad that I was robbed of a player to cheer for. Even if I did pull a Bosa or Haskins, I would now have a reason to cheer for them. Fact is, the average collector is like me and doesn’t flip cards anyway. I would much rather get a redemption for a random player, and not just because I don’t want to pay the shipping cost that you have with points. Heck in most of my cases, the shipping cost more than what I paid for the points.
Also let’s focus on the production run. Contenders has a ton of autographs in it’s checklist. I get that athletes don’t always send in their autographs in time for production. However I have pulled redemption cards specific to a player in Contenders before. So what does it say that Panini puts in points? My takeaway from this is that maybe they are making too many of these.

Now normally, I really like points. I used to love it when collectors rejected points because a bottom feeder like me can pounce on them for cheap. I have grabbed some cool stuff from the program. I grabbed a Walker Buehler autograph on there for 150 points before he became huge. I also finished off random cards for my Prestige college. However now that so many people have been exposed to points, I am finding the benefits to them few and far between. Those examples are 2 to 3 years old. I feel that points have run their course. I feel that Panini needs to do something to freshen up the market for little guys like me who don’t have tons of points laying around for the bigger offerings. They definitely need to get rid of the shipping cost because in most cases the shipping costs more than the card is worth and I hate the concept of paying twice for something.

Let me end this with rant about the offerings on points:
I don’t like the Kaboom or White Sparkle packs either. First they are too expensive for my taste. Second, I feel like they ruin something special. What used to be case hits is now dumbed down to a pack. Just because people are paying as if they are case hits, doesn’t mean they are. Who know’s how many Panini produces because they don’t release the production numbers. To me, those feel like the most blatant money grab possible. Sorry for my poor grammar in this paragraph, that is what happens when I get angry.

As readers of this site know, my uncle created the Marvel character Deathlok. Now that I am on e-Pack I am looking to stock up on Deathlok cards.

If you have any that you are willing to trade then hit me up on there. My name on it is pandanwh, and I have a Dallas Stars avatar. I will trade numerous digital items for one physical Deathlok card. I would also consider any non autographs, unless it is for a printing plate.

As for e-Pack, I got lucky yesterday. I bought 2 Black Panther packs because it was buy one get one free. I got lucky.

It’s a $6 auto but I am ecstatic about it. I am also pumped about the Vibranium card.

Donruss baseball is one of my favorite sets this year. Heck, I am doing the set. The autograph checklist is great, and it takes what I like about Topps Heritage and makes it readily available; I am talking about the base card variations by that comment. Since I am still trying to complete my base set, I took a shot at the Target Mega Box. I am not a mega box type of guy but this was worth it to me.

The allure here is the pink parallels. The inserts have a fireworks feel while the base cards lack the pizzazz; well as much pizzazz as bright pink will  let you.

The blue and white stars parallel snuck in with an appearance that I wasn’t expecting. The autograph was of Garrett Hampson. I thought this was a safe set and that I would get a better autograph; maybe next time.