Chronicles basketball was released this week. It was the rare release where both retail and hobby hit at the same time. I am a basketball collector and this passed my regret test. I also saw that Luminance was in these so I am chasing and Anfernee Simons Luminance rookie.

Sorry about the picture quality in this one. Porter Jr. bronze parallel. 2 Gilgeous-Alexander rookies. The checklist is rookie heavy. 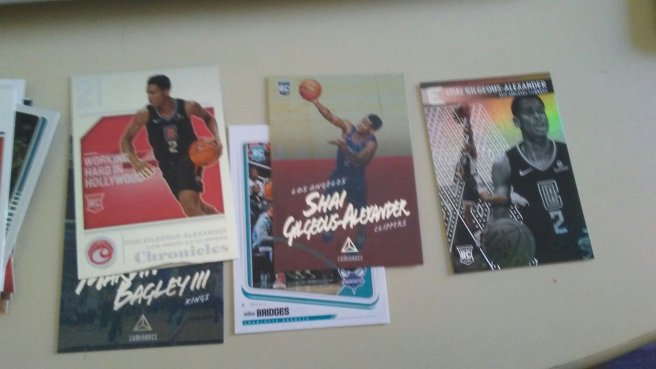 Not one, not two, but three Gilgeous-Alexander cards. Good thing that I like him.

My mom saw the remnants of the packs as I had them on the dining room table. She commented how awesome it was that they put the variety in. She doesn’t know a thing about basketball but she looked through them. For those unaware, in the early 90s, my mom and I collected together. We never collected basketball at all. It was nice to share a collecting moment with her.

These were oddly priced. Instead of the usual fat pack price at $4.99, these were $5.49.  That extra 50 cents instead of a dollar more seemed odd to me, not that I am complaining.

The cards here probably lack value as the printing is out of control. Still if you are a player collector, this will be a fun set.