This is my least favorite post on the site. I do not recommend starting your collection based off going to Target in today’s market. I did not know what the card market would become when I posted this. The people who go their and wait in line, in 2021, are pieces of work. I have heard stories of fights. I have heard and verified stories of some of the same people who are in this story, actually are people who have stalked the Target stockers. If you do anything support your local mom and pop card shop. (4/19/2021)

The other day, I was at Target while the card aisle was being restocked. I am not one to jump in on this new fad of raiding Target’s for blaster boxes. With having asthma, and being on 3 inhalers of it, I am not taking Covid lightly. I might prioritize shopping at Target instead of a grocery store for groceries because they have cards but that is.
So I was at the tail end of one of the trips with my girlfriend. I had ice cream in the cart. It took the guy restocking an hour. My girlfriend is amazing and found stuff to do because she knew how much it meant to me. First thing that he puts out is rack boxes of Topps Chrome. Not knowing what will be put out next or the price, I grab all I can. The other guy takes 2. My intention was to trade if more people came as this looked like it would take a while.
Optic Baseball blasters and Prestige football mega boxes were next. The other guy didn’t like either. I take the Prestige boxes leaving Optic baseball there. Chrome cello packs were next. I initially pass thinking that they were $15. By this time another guy arrives. He lets me take what I want. By this point, my girlfriend checks in on me. I use her to scan the prices. Rack boxes of Chrome were $15, and the packs were $10 she says. I thought that they were reversed in price with packs being $15. I switch my strategy and grab half of the packs. I figure that exclusive parallel cards would hold more value than the rack boxes that gave you a pack of Topps Fire. I left a ton up for anyone else because I have an embarrassment of riches at this point.
I make conversation with the guy restocking and he seems to like us. We treat the people around fairly, offer to help him at times, and overall treat him with respect. He tells us that he has seen some stuff and yesterday he felt like he got molested a little. This is not this crew. We chat about how we enjoy the hobby, and make sure that we all get a piece.
The first guy checks out and leaves just in time to get 1 of the 4 Chronicles basketball boxes. We don’t know that there are 4 as the person stocking only takes out 3.
By this point, we were able to see that what was left. I grab Topps Series 2 fat packs and check out. I told him that he could have the Chronicles box we saw by peeking, if he didn’t sell it to my hobby shop.

I was surprised at how the other collectors didn’t understand the value of cards. I am of the thought that I want to sell high. He was going to sit on stuff for years or open Chronicles. He was bragging about how he got a couple of Zion’s in one rack pack. I was explaining to him that Chronicles does not hold individual value the way that others do. If Zion is on the checklist 10 times on a 400 card checklist, they won’t hold as high value individually. I pointed out how Luka Doncic’s cheapest rookies are from Chronicles. I worry that I broke his heart. I also reminded him that this is a hobby first. If people are lucky, they can make money but that boxes fluctuate on whims of what is hot. How value always peaks when the product is new. I told him that it was important to me to leave stuff for other collectors by not taking absolutely everything.
It was kind of draining explaining this when I just wanted to get out of the store in the Covid environment. I had to explain things like basic scarcity and eBay sold listings to these guys.
I felt obligated to stay because chances like this never happen to me.

Overall, I spent $400. I am probably only going to open a couple of the Series 2 packs. I am debating opening my Chronicles mega as I am just happy to have the choice at opening something basketball at a reasonable price. I love the Memphis/Vancouver Grizzlies and was expecting to get a player like Ja Morant’s autographs under $50 like I would before the card boom took place because the Grizzlies historically don’t sell well. My ice cream did melt and by the time that I left my girlfriend’s house 6 hours later, it was not done freezing.
As draining as it was, being able to share this experience with my girlfriend made it special. She sees that I am taking a risk on our future. If I break even on this, I can at least help my credit score.

I’ve noticed this product in blaster form and kept my eye on it. Ultimately I passed because the $30 price point with no guarantees not for me. When it came out in hobby form, I decided to reward myself as I ultimately like the cards. I liked it so much that my local hobby shop put in a special order for me because I requested it. At $80, in today’s market, this was definitely fun.

I’ve been very busy and will try to post when I can. Life is crazy in 2020 and it feels that mine is no exception. I am still here and will post when I can. My goal has chabged to 3 Friday posts a month on this page. Some less, some more. In the meantime, keep an eye out on my Twitter for some contests.

I found this for a buck and grabbed a few. They all offered the same. I don’t know much about the details of these.

I chose the one with Ty Cobb in it because I think its time to remove him from sets.

For avid readers of this space, you may remember a 2017 episode I had where I got scammed on eBay. You can find a long winded post about it here: Angry: Turn that frown upside down. TLDR: He filed a false claim. eBay automation sided with him. I had to call and get decision reversed. Person on phone representing eBay saw immediately, he scammed me.
Well, here we are 2 and a half years later, and the cause of that very incident has popped up. Before that, let me plug my eBay sales. I am auctioning rare Michael Jordan’s, a Scottie Pippen rookie card, and some Rodman cards this week. They end in 2 days, so take a look:

Let me preface this: I am not angry at the chain of events that I am about to show you. I am amused and feel that it is a welcome distraction to this craziness. One of my favorite shows is Cops and here we have a future Cops star in my inbox showing me his true colors.

Now onto the fun. Mr. DeadShotPokemon messaged me in February, again 2 and a half years later from the time he scammed me, on Twitter out of the blue. I present to you a screen shot of the messages. My replies are in orange. 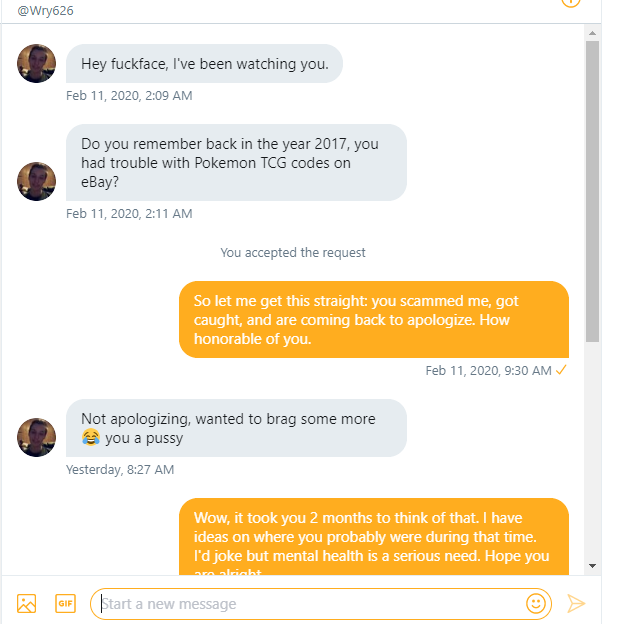 Yesterday refers to April 23rd 2020. I did the math and that is almost 75 days apart from the message. 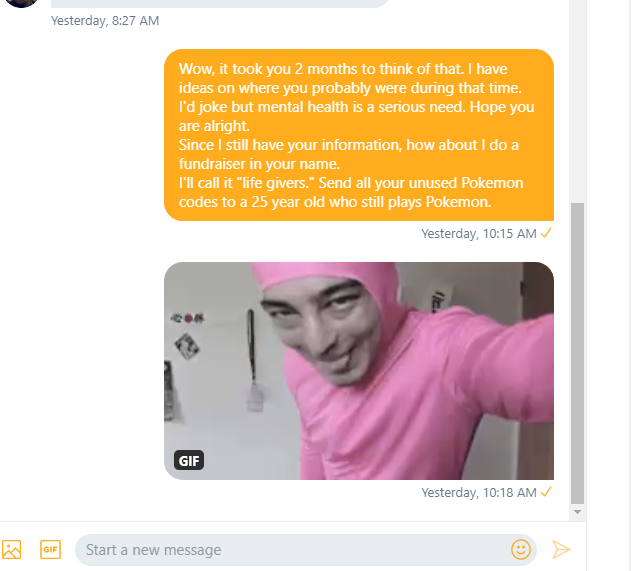 How random is this?

This insanity has made me more active as a seller on eBay than normal. When I sell, I take eBay up on the option and I always add a charity to help on my listings. This gives them 10% to 20% of the item listed. I don’t add anything extra in my description. I let eBay add it via there end.
I have done this for several years now. I don’t target any specific charity because there are so many places that I want to give too.
Recently, I was sent a message that caused me to remove every charity part of my listings. I posted it below. I will let you be the judge. My first thought when I got this was that it was a phishing scheme. I did an internet search of the person and charity with scam following their name. 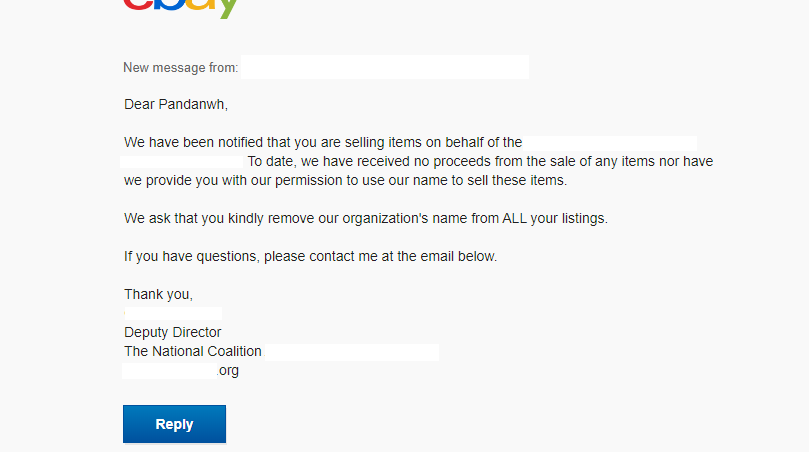 I emailed the person and had a strong interaction with them. The interaction stopped when I sent her this message:
“I have to be honest, you are making me feel like I did a bad thing. I was using a service that eBay offered and every association I had regarding the listing with you is from that. This is leaving a very bad taste in my mouth. All I was trying to do was give to a charity that I thought was good. I was simply following up because I felt the eBay message was very awkward, especially considering the spelling and grammar mistakes. This interaction is making me question everything.”

So what do you think about this? This happened almost 2 weeks ago and I am still questioning everything. I want to know, is eBay holding money from charities? If so, what is the minimum the charity has to cash out? If this isn’t a problem on there end, perhaps this is a charity worth monitoring if someone isn’t giving them said eBay money. Who is this person and are her actions doing damage to the charity consistently?

Those of you that know me, know that I more than made up for this and have directed more funds than I would have given via eBay to my local free clinic.

While we are at it, here is my COMC page as well:
https://www.comc.com/Users/pandanwh,sl,i100