I don’t usually buy new products but with demand for this rookie class out of control, I was open to it if I came across a few packs. As most of you know, I collect basketball normally. After seeing some of the pictures of these rookie cards, I wanted some for myself. After seeing Donovan Mitchell light up the Clippers when I attended a game a few weeks ago, I knew that I had to get his rookie.
So at Target I came across rack packs of Donruss and picked all 5 up. I originally was going to treat myself to 3 but at $4.99 they were cheaper than I was expecting.

Pack 1: I scored what I wanted in the Mitchell rookie. 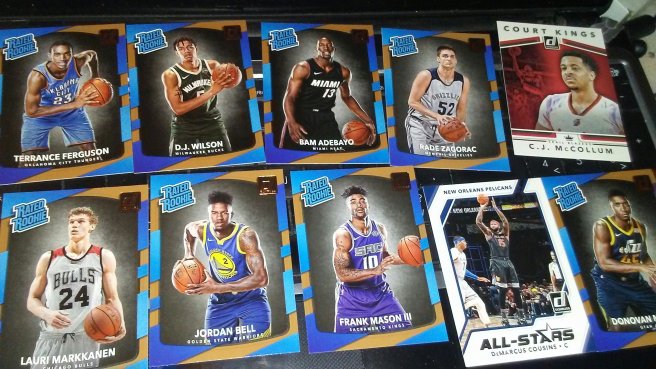 Pack 2: Dennis Smith and Lonzo Ball rookie in the same pack. Not bad. Who am I kidding, most collectors dream of this. My favorite pull of the pack: Jonathan Isaac.

Pack 3: It looks like packs with the green parallels have 2 less rookie cards. Josh Jackson and OG Anunoby are my highlights but I wouldn’t be surprised if any of these rookies from this pack make something of themselves. Something that I can’t say about rookies in other packs.

Pack 4: This is probably the pack that if I just picked it up as a one pack purchase, I would be the happiest to get. Kyle Kuzma, Jayson Tatum, and two Memphis rookie cards. The Grizz are one of my favorite basketball teams; then again I have a few favorites. Jordan Bell has been getting a ton of hype and the Rookie Kings cards are beautiful.

Blaster boxes for this year are going for $29.99 so I paid less than a blaster box and got a ton of rookies. Truthfully, I am ecstatic for my pulls. I will be honest, if I was a betting person, I would bet on a ton of busts in this class. That said, it is nice to have nice things. At $4.99 for a rack pack, you cannot go wrong. Rated Rookie’s are the best rookie cards to get.